A bicycle ride for civil engagement

Paciclica wants to draw the attention on the ambient sustainability, reaching Perugia and Assisi by bicycle. We, the participants, were not particularly athletic indeed… We are just normal people who think while cycling. People that think about sustainable mobility, about the relationship between man and territory, between cars and city. People also thinking about wars made for the oil and to the close relation, existing nowadays, between ambient Sustainability and the run-up for the control and hoard of fossil energetic sources, with progressive acquisition of knowledge and deepening of topics related to Peace and ambient sustainability. Two themes more and more interconnected each other. 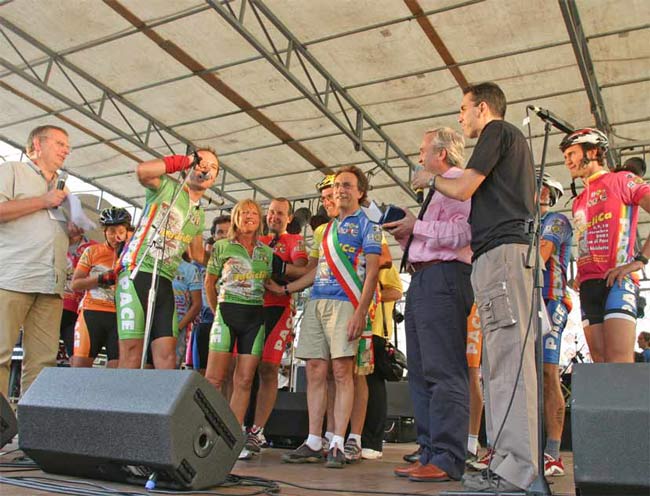 In September 2003, thanks to Corrado Ponzanelli’s convictions, we proposed a ride to reach Perugia by bike. The idea was: from Solferino (province of Mantova), where the Red Cross was founded, to Assisi, city of the Peace and non-violence. After that first and solitary experience, we repeated the event in 2005 creating a logistic structure to support 17 persons that were going to bike in 3 days beyond 500Km. The environmentalist and pacifists thematics joined the bicycle. What a wonderful experience; it is quite difficult to explain our feeling when we arrived to Perugia, in 4 November square and getting on the stage of the Table of the Peace where Flavio Lotti, Massimo Cirri and Filippo Solibello were attending us (see photo at side).

We repeated Paciclica also in 2007: it was an extraordinary result, recognized also by the Italian Ministero dell'Ambiente that gave Its patronage to the event. Around 40 cyclists started from Loggia square to reach Perugia at the presence of the Mayor and some councillors of Brescia. During the trip, RAI carried out a national radio broadcast with interview. A great gathering moment: the FIAB associations of Roma (Ruotalibera) and Ostia (OstiainbiciXIII) joined us spontaneously.

The Paciclica Project, intended as riding on the bike for civil engagement, is not get exhausted in the “single one” ride to Perugia and consequent march to Assisi; at the same time, thanks to Alberto Nencioni, we have approached to the committee of the Citizens for the Memory of the Vajont and Lucia Vastano, author of the book “Vajont the Long Wave”. This was the starting point for the birth of another event: Vajont a bicycle ride for civil engagement: to reach the sadly famous Vajont dam by bicycle, the same as of the journey to Assisi. Another great echo ables to involve 38 persons in the October of the 2009 read here - see here the video minicilip

From these experiences happened other decisive moments: presentations to cultural associations and the participation to Ciclomundi.